I was thinking this morning... I haven't really been keeping up all that well with blogs (mine or yours) and such.  And, I think I may be in a little of a blogging slump.  But, while I haven't been necessarily doing bloggy things, I have been doing life things.  So, I thought I would tell you what has been going on the Vintage Junky house and sprinkle in a few photos of the newest pieces that I have completed for funsies. 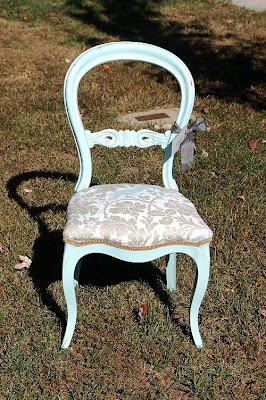 holly chair
First off, let me tell you about the fabulousness of last Saturday. For my hyena anyhow.  And, let's face it, if he is having a good time, most likely I am too.
We went to the Pumpkinfest on Main Street in Franklin.  But before we went there, we went to a train store.  Where he stole a "woowoo choochoo" (ie an ambulance) from a little girl and proceeded to take over the entire train table.  He loves his trains. I am amazed of how many names he knows and how I am pretty sure colors are coming next. Seriously folks, we quiz him.  And he knows most of those silly trains.
So, after I literally dragged him out kicking and screaming (and hitting) we went to the Fest. It was packed!  I dressed baby hughes in his owl costume in the car and we set off to the toy store to look to see if they had the woo woo choochoos... I am an enabler, I won't lie. They didn't (but amazon did *wink*) so he picked out Duke instead.
Then, after walking around and playing with a random giraffe, we went to eat pizza (cheesebread for the raptor.) It is his favorite place to eat..... you can just tell.  He loves it. On our way home, we stopped by a cupcake place to get what he had requested earlier in the day... a cucake.
So, between the owl costume, all the train goodness, the cheesebread and the cupcake, I am thinking I am the most totally awesome mom ever.
What did he ask for the next day.... choochoos. And later... cucake. 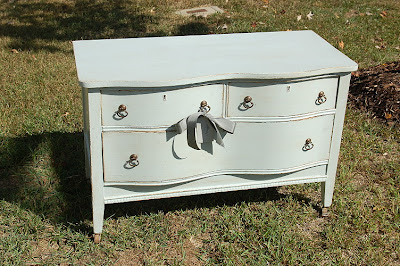 hannah chest
And, as awesome as I am, I have been reluctant to give in to the whole train table deal.  I love my kid and all, but I really don't want our home to look like a daycare.  Sorry if that offends you, but it is the truth.  But, after seeing that monster like totally zone out and really get into it, I am going to let Mr. Hughes build a train table... actually repurpose some furniture that we have in the garage.  I am pretty tight with Santa, so I have a pretty good idea that baby hughes will be getting some pretty swell Thomas stuff this year. And, the little table downstairs isn't going to cut it.  And, apparently the floor won't either.
Which brings me to my next "what I have been doing point"
I am almost completely finished Christmas shopping.
That is right. Throw some confetti and do a happy dance for me.  Just don't hate.
You want to know my secret... free shipping.  Oh and etsy of course. 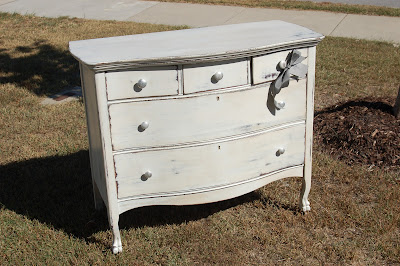 ﻿Ingrid chest-- went to a new home in a nursery *smiles*
And, while I haven't been really mixing things up in the house (a few things in the works)
I have been purging still.  I redid the bookshelves and got rid of some books.
And, the house has been pretty clean for the past couple of weeks too.
And, the laundry has been kept up too.
I found that if I don't wait until the hampers are exploding and the Mr is complaining that he has no socks, that the laundry will be in control. So, I do a load every other day.
Exciting and compelling, I know. 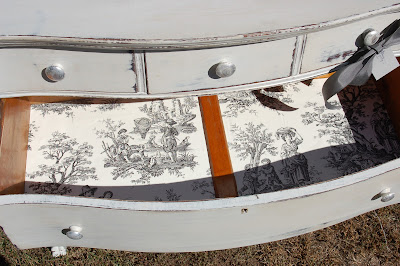 Pretty silverleafed knobs and toile lined drawers
And, we have been taking a few steps to expand the business.  Mainly, looking for another place for a second Vintage Junky booth.  And, taking steps and spending money on my business always makes me a wee bit nervous.  I am somewhat of a perfectionist and I don't like to fail. Especially when it involves money.
I am excited that a few Vintage Junky items (like the Holly chair) are at Winchester Antiques in Franklin.  I don't have a booth there, but the owner was nice enough to allow me to place some items there.
I am also getting a few things ready for my etsy shop (which I updated the other day with some vintage lovelies) and for my booth at The Roost (which is having a open house this Saturday.)
And, guys, I am ready for Christmas.  I am ready to make new stockings and new ornaments and lets face it..... I won't be able to make it thorough without adding more snowflakes.
So, be looking for some craftiness in the near future.
So, I am finished with the play by play of recent happenings.
Bye for now!

Labels: about me, after, booth, Franklin, furniture