What I love today 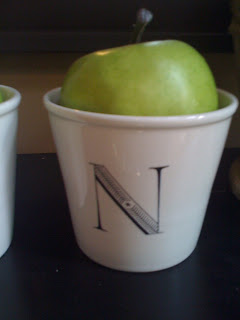 I love this little pot that I found in mysweetsavannah's etsy shop. It is the perfect look with the black on cream. Just think of all the words that you could spell. You could spell out "HERBS" and put them in a sunny kitchen window. I think I will buy "NEST." And, they are only $6 each... very reasonable. Here's the link if you have to have them: http://www.etsy.com/view_listing.php?listing_id=25178324 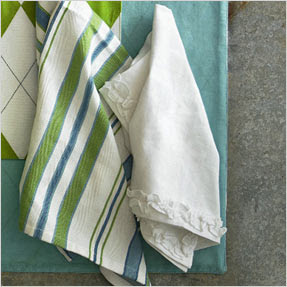 I also must have these tuxedo napkins from Shoestring Home. They remind me of these great shams I once had that were samples from a bedding designer. They are long gone after they were ripped beyond repair by my beloved doggie. They were a really soft white linen with the same small pleat. I may get Mr. Hughes to make me some vintage spoon napkin rings for them. You can find these at www.shoestringhome.com
Well, I am off to hopefully complete some projects.
Posted by Michelle Hughes on Saturday, May 30, 2009 No comments: 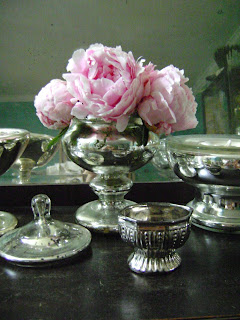 Aren't peonies beautiful? They are my 2nd favorite flower. I finally had one come up this year... not these. I bought these from Whole Foods. And I decided that they looked great with my mercury glass.

I have been extremely busy... moving Baby Hughes away from everything he isn't supposed to touch: the fireplace, shoes, DVD player, you name it, he wants it. He is cruising now and pulling up on everything. And, he is sleeping much, much less. All of this added together is the reason why I haven't completed any projects. I have thought of more things to do though. I just need to stay home the entire weekend, that way I won't get anymore ideas. I was in Michael's last weekend and I thought of this idea. Mr. Hughes has always disliked the sidelights by the front door. During the holidays, they are covered in paper snowflakes. But, during the rest of the year, he thinks that they don't offer much privacy. I like the light they let in, so I really didn't want to cover them with fabric. One night, on the verge of sleep, I decided I would order a decal with our address number down each side. The next morning, I told him and I think his exact words were, "Okay, but I'm not really proud of our address." So I took that as a "no." Then while in the scrapbook section, I found this really neat paper that was a cut out like a stencil. I then decided to use frosted spray paint to stencil the windows. Mr. Hughes actually completed the project one day while I was at work. We are both pleased with the results. 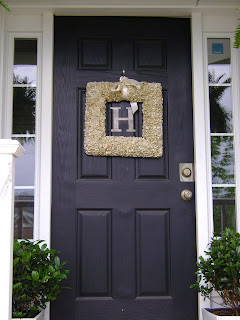 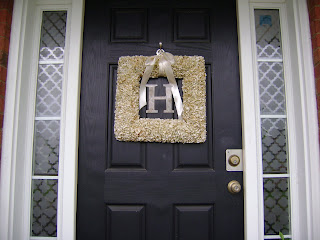 Over the next couple of weeks, we will be constructing a deck. And by "we" I mean not me. I will be on Baby Hughes duty. So I hope to get a few mini projects completed.
Posted by Michelle Hughes on Sunday, May 17, 2009 No comments: