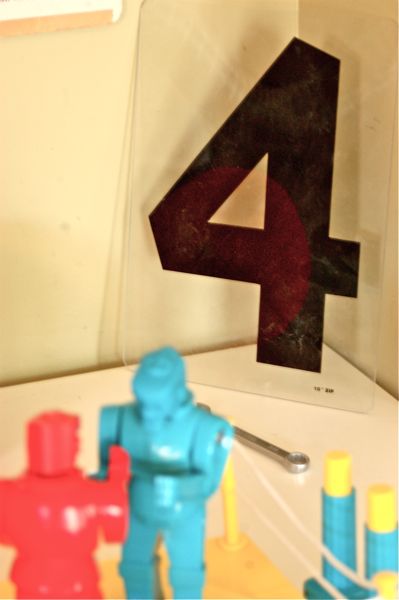 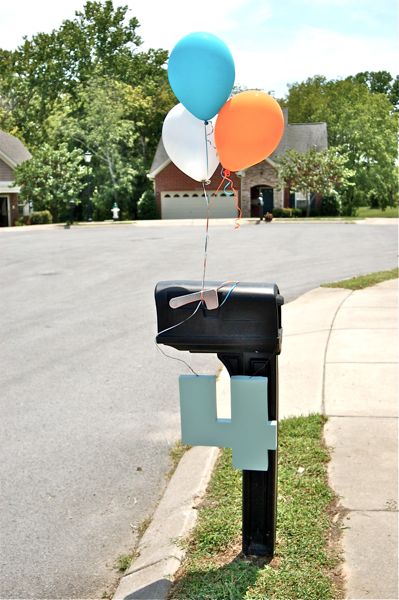 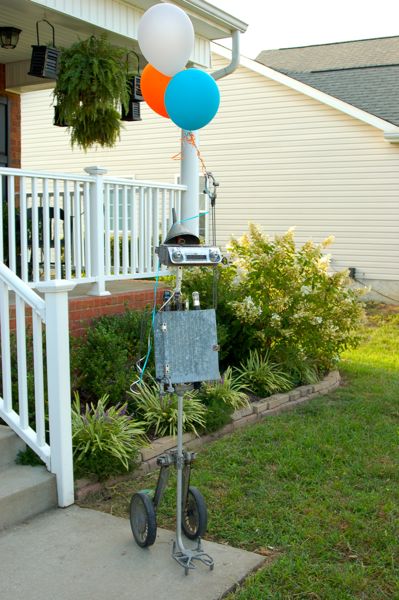 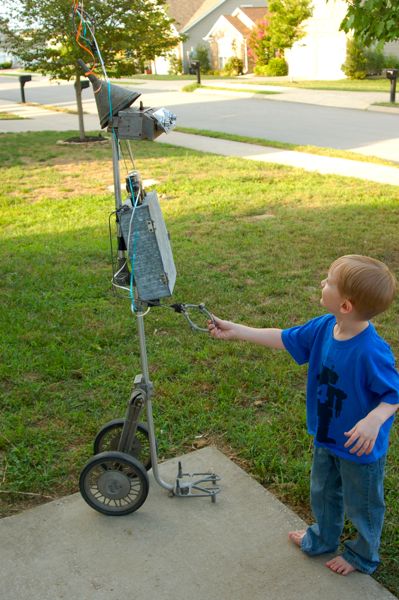 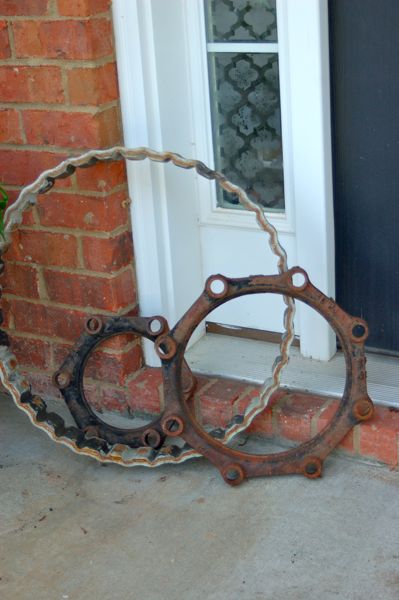 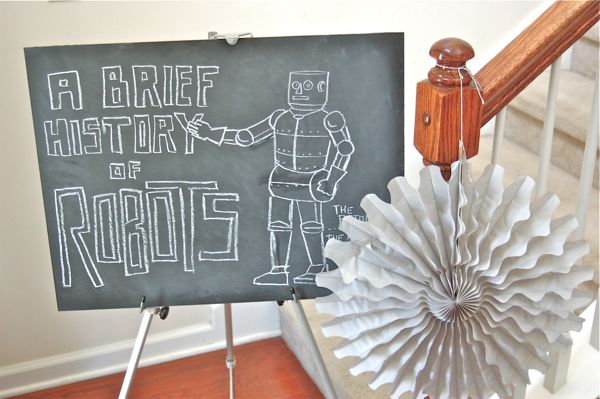 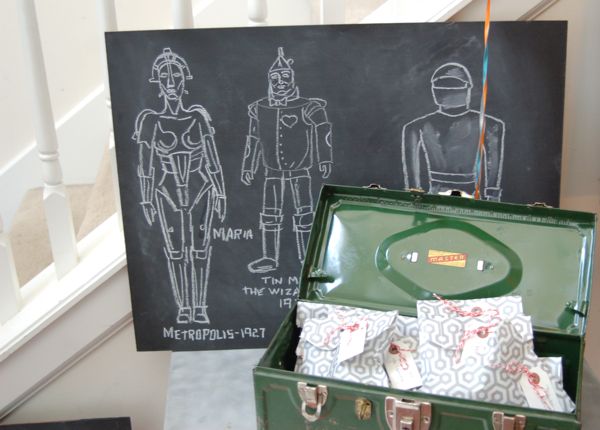 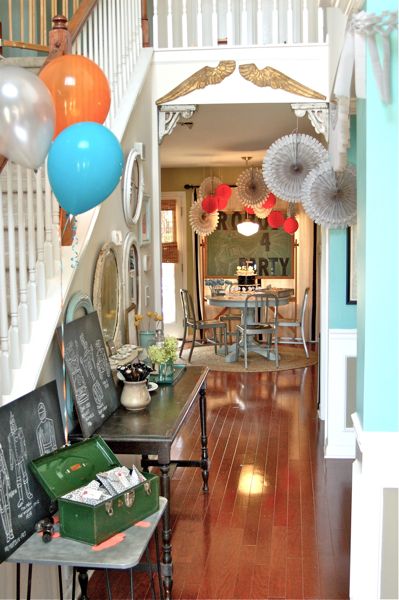 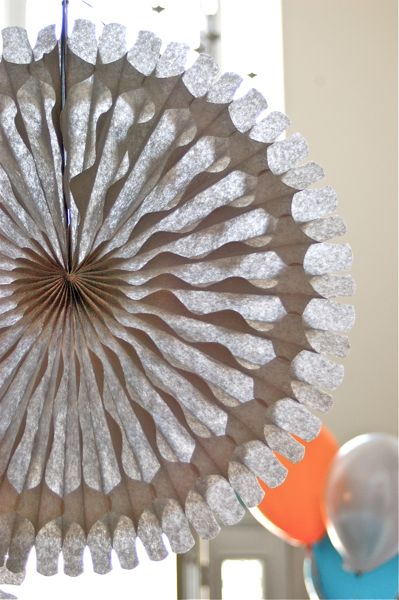 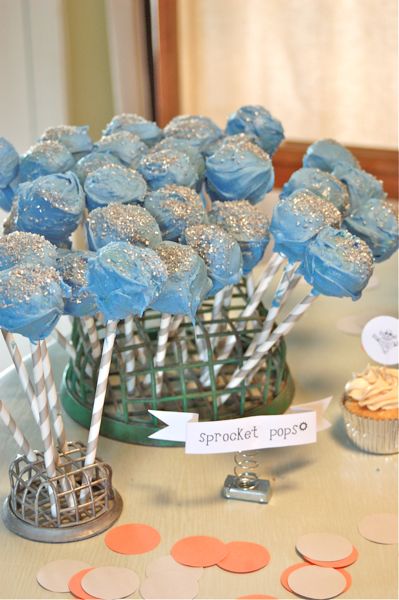 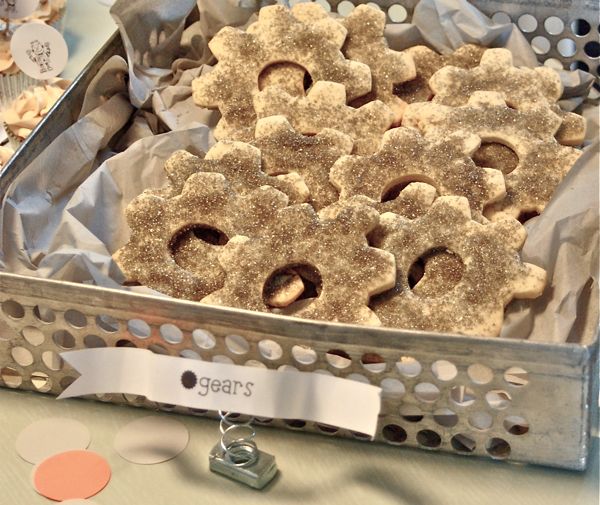 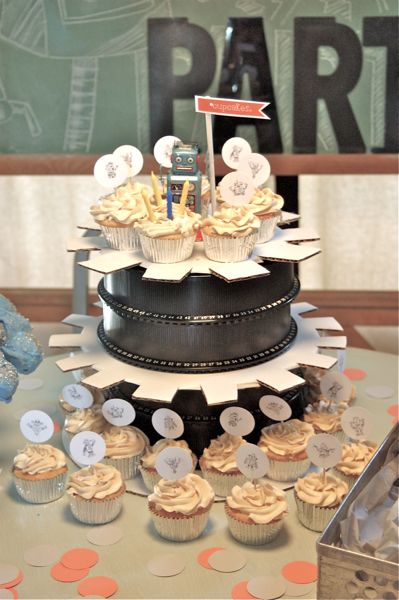 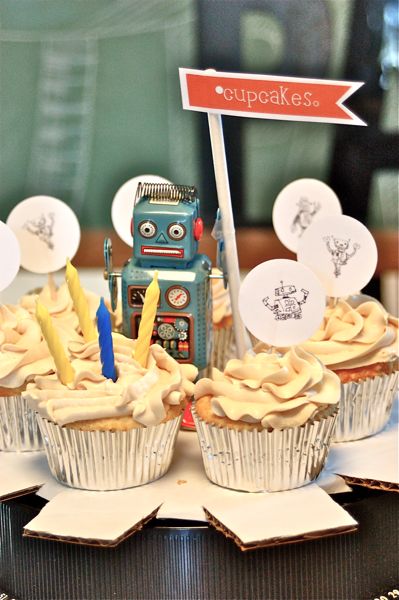 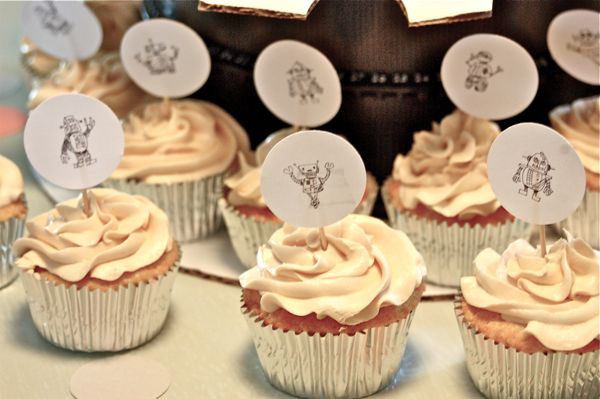 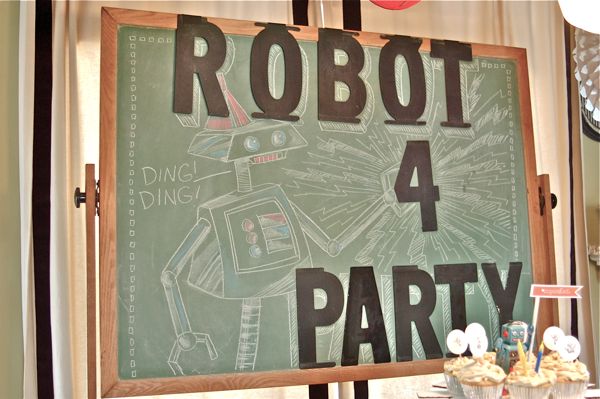 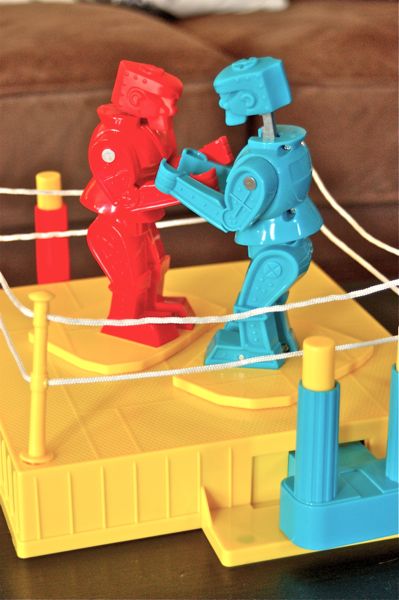 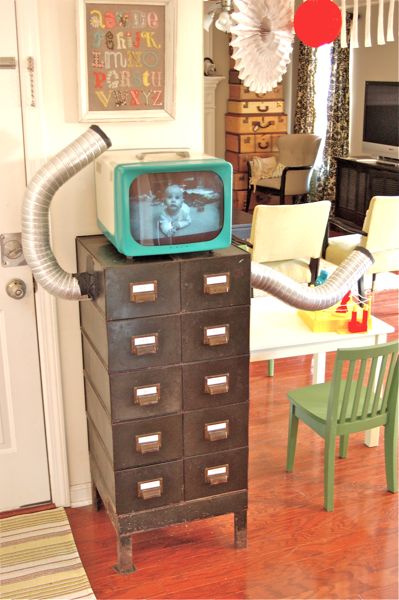 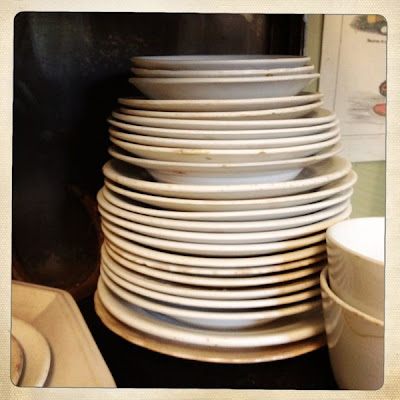 Hello all~  The other day I got a wild hair.  I was looking at my gorgeous stack of ironstone and thinking about how much I really love it and all its imperfections.  And, then I looked at the plates that we use everyday... Great White by Pottery Barn.  Nice plates.  But, aren't they really just a knock off of the classic that I love?  And, they haven't acquired any patina (save for a few chips) in the last 6 years.  So, why do I have a set of dishes that I love, but don't use?  Doesn't make make sense.  So, I decided to get rid of them (after the Mr. made me make sure the ironstone wasn't going to poison us.) My sister has graciously offered to take all the Great White off our hands and I just finished my first breakfast off of a plate that has that great feel to it.)

So, we started evaluating other things.  Most days, our downstairs living room is taken up by chalk art, which is a wonderfully good thing.  But, the Mr. has no great place to work on it.  His office is also our library/bonus/train table room.  And, it is currently filled mostly with pieces that we just don't love. Do you ever play the game in your head "What would you take with you if you really downsized?"  Nope? Just me?  Well, anyhow, I do.  And, after realizing that we both feel the same way, we decided to start selling off the furniture and creating a space where he can work on the boards.  We decided that we will turn my studio into a playroom (ahem, train table room) for baby hughes and take a portion of the bonus room as an area for me.  Since I have opened the shoppe, I haven't really been spending that much time working in there anyhow. 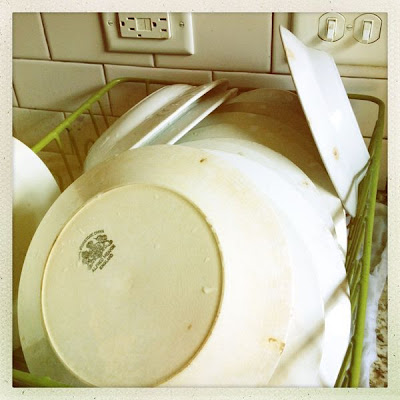 Lately I have been thinking about what works and what doesn't.  We had a really hectic July.  We have been blessed beyond measure in our businesses keeping us busy and we have been trying to figure out ways that we can manage them better.  Currently, I am getting quite a few requests for custom painting furniture... which I love.  I truly love painting furniture.  I love all that I do, but painting is at the tip top of my list.  Right now, I have Monday- Wednesday and after shoppe hours Thursday- Sunday to paint all the furniture... for us to sell and for clients.  And, it just isn't enough time to get it done.  The Mr. and I have talked over several options and the best option for me right now is to close the shoppe on Thursdays.  I have tried and tried to carve out more time by working before and after hours, but I really don't want to take anymore time away from my family at this point.  And, it will give me additional time to hunt more vintage goodness.  Right now, I have to take a "painting" day off to do that.  And, our little guy is between preschools at the moment and that is going to take time to find the best spot for him.  So, all of this together makes us just want to *simplify* I guess that is the beauty of having your own business, you get to make the your own rules.  I don't like to do things if I can't do them *right* and this will be the best way for me to carve out a little time to recharge my creative batteries and maybe clean my house more too *wink*  I will still always do *by appointment* on the days when the shoppe is not open for those who aren't off on the weekends.

Thanks for *listening* to me ramble and for all of your support!  We are excited to redecorate and we are also getting ready for Bella Rustica in September!  We had a great party on Sunday for the little man (photos soon!)  It was wonderful to be in the company of good friends (and family too!) 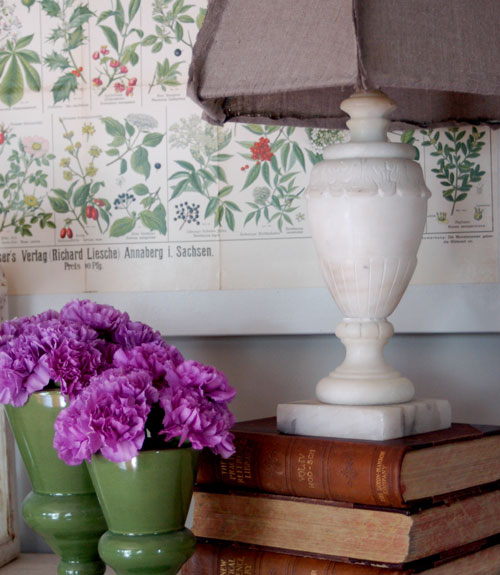 Hello all!  Just a super quick post since I need to get back to birthday stuff for my little guy's 4th tomorrow (just us tomorrow, party-party on Sunday.)   Country Living.com featured a little vignette I did in our living room as part of a 2013 color trends story.  I am thrilled to be featured with other very talented bloggers.  You can read the whole story here.  Back to preparations!  I can't believe he is 4!!!

A little time away 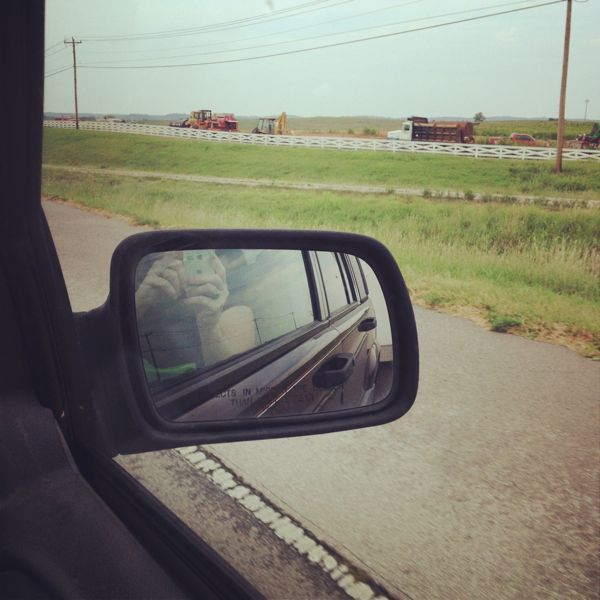 Hello and Happy Thursday!!  We getting back in the groove of things after a really quick road trip this week. We haven't had time for a *real* vacation this year and the last month has been a little trying, so we decided to get away for a few days. 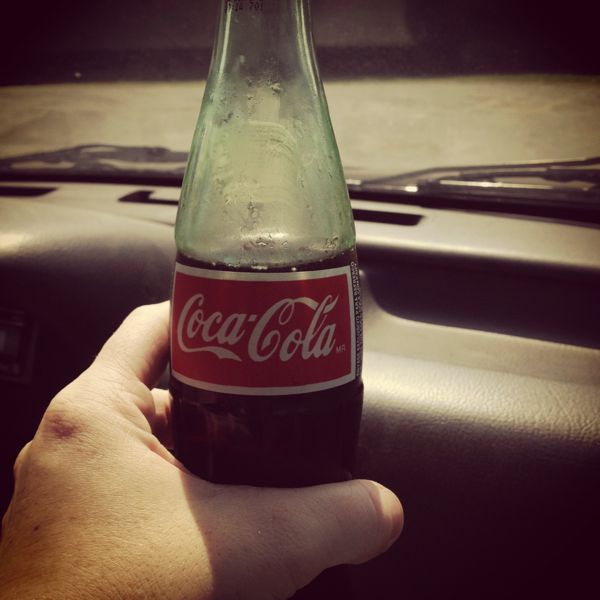 We had a loose plan, but nothing binding, so we took our time getting to our destination: Chattanooga.  It is such a cool town.  The only thing we had to do was surprise our almost 4 year old with a train ride on a restored steam engine.  Let me tell you.... hearing him shout and get so excited when he finally figured out where we were was worth all the heat of the day.  I am so happy that we have the excitement on video. 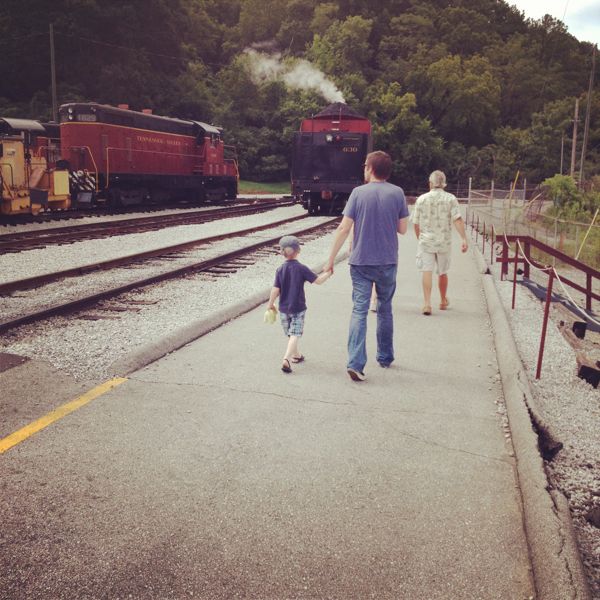 We had a short little ride on the engine that stopped out a real, live Steamworks.  All you mommas who have Thomas lovers know this is a super big deal.  And, we watched them turn a steam engine around on a turn table.  All very exciting! 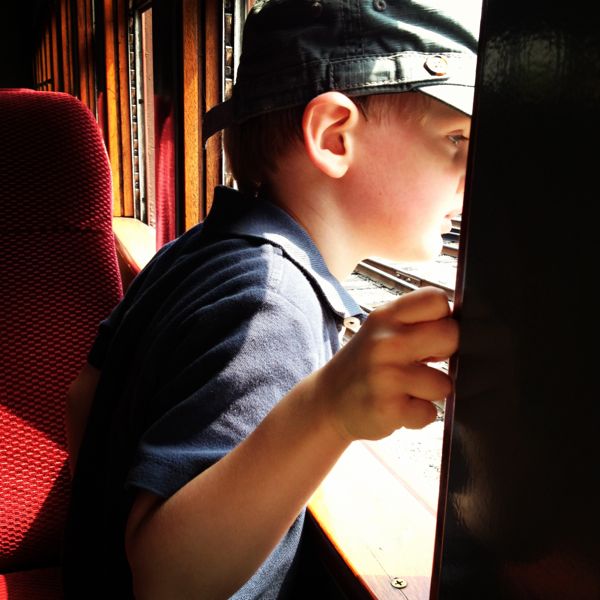 He was brave when we went through a very old, dark tunnel... probably braver than me *smiles*  We could have used a few more days, but I am thankful for the time away.

We did a little shopping on the way there and back.  I scored a great treasure (show you later) and was able to fill the shoppe as well.

More soon~  Have a happy sort of day!