The kitchen cabinets are almost completely finished. I just need to sand down a drip and paint the ceiling where the painters tape ripped off the paint down to the drywall. I hate painters tape. I don't think the pros even use it, so I am not sure why I continue to bother. I am planning on putting up corbels under the cabinets. I also have to put moulding on the back side of the glass cabinets. The glass wasn't easy to remove, so you can see the old cabinet color when you open them. So I am going to call this project 85% finished. I really like the look so far though. It is much brighter.

We have been out the past couple of weekends treasure hunting. Last weekend we went to the Flea Market at the State Fairgrounds. We figured it would be the only time we could go before it got too hot to bring Baby Hughes. He seemed to have a good time. We picked up quite a few goodies over the past 2 weekends. Some will get minor facelifts. I am planning on painting numbers on the white stools. We are going to put them outside once we get our deck finished, but I also think they could have a home under the console in the kitchen. I also really want to paint on the brown wicker laundry basket. Numbers or words, I haven't decided. I guess if it doesn't come out the way I want it then I will paint it all black. We will also paint the breadbox that we scored for $7. And, of course I couldn't pass up the ironstone at the Flea Market.
Here are a few photos of our finds and I am off to complete a few of my million projects. 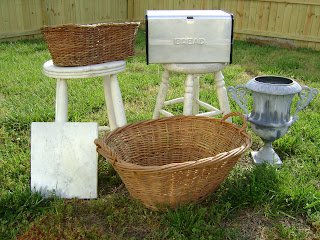 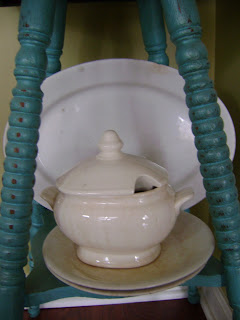 Posted by Michelle Hughes on Thursday, April 30, 2009 No comments: 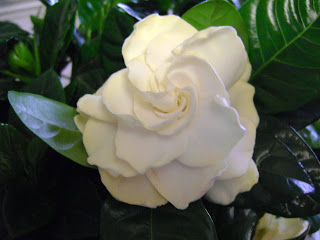 Well, it hasn't felt that way for the past few days, but it is still here. This past weekend, Mr. Hughes and I took baby Hughes to the Bloomin' Garden Show at the Ag Expo just outside Franklin. I have been going to this show for the past few years now for really one purpose: to buy and ultimately kill two small gardenias. I love everything about gardenias, their scent, the thick white petals, the glossy green leaves. But, they are a beast to keep alive. Mr. Hughes and I joke that we have chalk outlines around where each of them has died. But, I love them and a few weeks out of the year is worth the money that I waste on them. Last year, after trying to get them to bloom again, I gave up and put them outside, daring them to die. Well, apparently that is where they wanted to be. They bloomed again and then I let them die in the fall.

After the garden show, we went to a few of our favorite places in Franklin. We stopped by Scarlett Scales Antiques and found a great crusty planter that will be perfect on top of our future table under our future pergola on our future deck. Mr. Hughes assures me that it will be too heavy to put on the table, but I really want it there. We went to buy a few plants from Home Depot and bought some moss to fill it. I think it looks great! 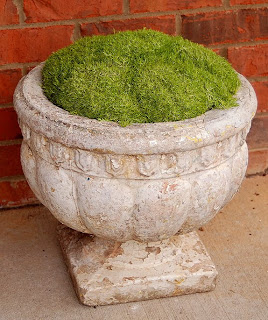 My plan for the next two weekends is to paint our cabinets: uppers- China White and lowers- Revere Pewter. I'll post before and afters. I really want to get all this indoor stuff completed soon. I like to be outside just like those ridiculous gardenias!
Posted by Michelle Hughes on Wednesday, April 08, 2009 1 comment:

Well, the living room is finally finished. Of course, it took much longer than we had planned. I laugh at the fact that we thought it would be finished in a weekend. It was so hard not having a living room for a week. I think that baby Hughes was really missing the large space to move around. We went ahead and completed the trim around the top. I decided that I really didn't want to move everything out of the living room again to do it. It turned out great. It isn't actually crown, it is two different types of moulding. I painted the space in between them the same color as the trim. Mr. Hughes seemed very happy that I didn't make him cope crown moulding around the existing fireplace moulding. Here is the completed living room (that is until I decide to change something!) 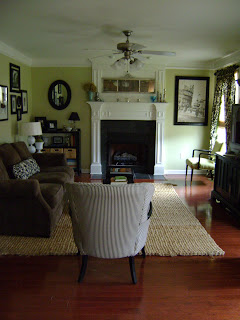 Here is a detail shot of the completed fireplace with the slate tile that we honed and waxed.... much better than the ceramic tile! 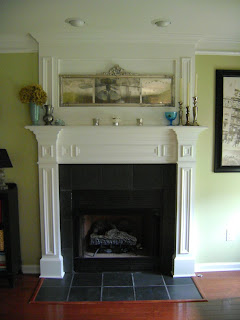 During all of this, our fence is being built.. Luckily, that doesn't involve labor from us. I am already planning our next projects; I have to take advantage of my 3 day weekends coming up. Next on the list.... painting the kitchen cabinets!
Posted by Michelle Hughes on Sunday, April 05, 2009 1 comment: