What I Did This Summer

Image from stolaf.edu
Well, the proper title would be "What Mr. Hughes with Some Help from the Mrs. Did This Summer." School starts back at some area schools this week and even though I don't have a back-to-schooler, it has me thinking of school supplies and beginning of term essays. How many times did you write this one? Well, I thought I'd show you what has been going on in the backyard of the Hughes' Casa for most of this summer. 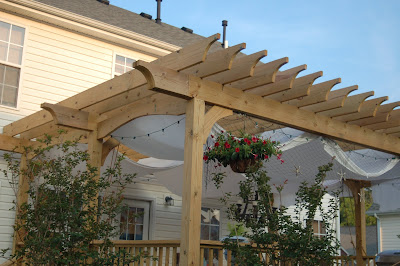 The massive undertaking of the deck and pergola. We had someone come in and frame the deck and he ended up coming back to build the pergola (thank goodness!) Mr. Hughes laid all the deck boards on the diagonal, built all the railings and the steps. Mr. Hughes originally planned on notching all the boards and building the pergola, but it isn't a one man job!! We aren't planning to keep the sheets up all the time, I just want them up for shade while I attack a painting project this week. 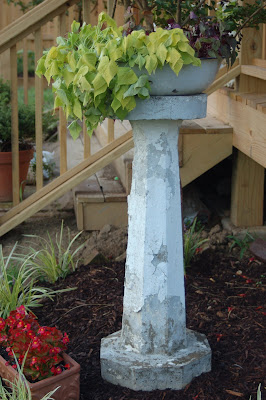 One of our great finds! The bottom half is a chippy birdbath base. It was missing the top, but we found a big enamel bowl that fit perfectly. You can see in this photo the deck skirting is missing. Mr. Hughes refuses to do anymore labor until it cools off a little! 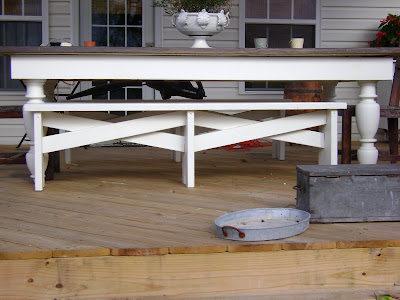 Our deck is messy, but I snapped this photo anyhow to show the table and benches that Mr. Hughes built. Here is where I chipped in, I painted all of it! It is gigantic and sturdy. 3 grown men actually used this as a boost to put up the pergola beams! The top is a dark brown stain and the bottom is a creamy white. We found the legs on ebay from a company that makes butcher block islands. These were considered seconds only because they were not stain grade. Mr. Hughes then just built a frame around it. We decided benches were more practical than several chairs. I gave my input on the bench design... they are quite long and they needed center supports. I really like the rusticness of them. I also like to use words that don't exist in blogger spellcheck! 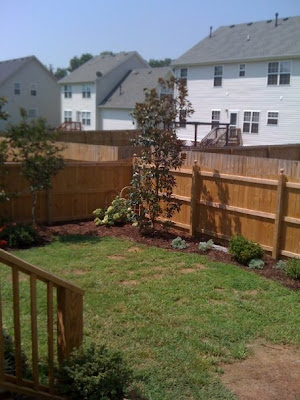 One of the many trees we planted this summer. We planted 7 crepe myrtles, 2 river birches, 2 magnolias, along with 10 azaleas, countless monkey grass and a hydrangea and some other smaller plants. We plan on adding more plants over the next few years. I want the garden to have a layered look, but not too messy. 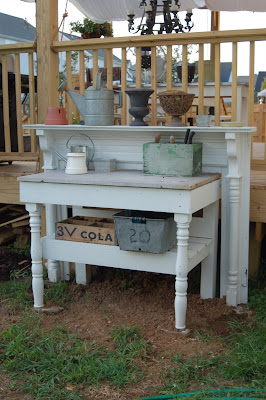 Here is what I am really excited about! My very own potting bench! Mr. Hughes created this masterpiece using an old mantle for the back, 2 posts from an old porch, and a marble top. He built the frame out of leftover lumber from the deck project. He plans to put it on top of a bricked base this fall. I can't wait to use this this fall to pot some pansies. 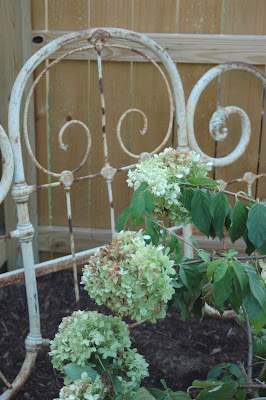 Here is our sad hydrangea. She just doesn't like this heat. And, behind her you can see a vintage headboard that we picked up from Scarlett's a few weeks ago...it may move to another location in the garden. 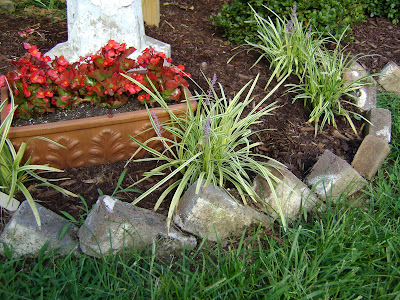 This a brick border that we dug around the two mulched areas that surround the deck. These bricks have some history: they came from an old street in Nashville after they paved it with asphalt. We have a stack still, but not nearly enough to use for border around the whole yard. And you can also see our sad, sad grass (weeds.) What are we going to do with that? 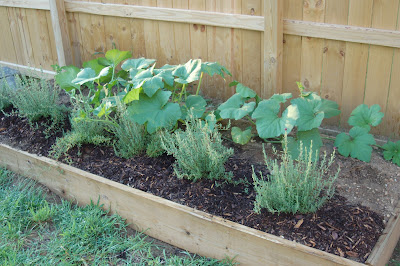 We plan on putting out some veggies next year. Right now we have some pumpkins and lavender (weird combo, huh?) I am going to paint the base of this bed and try painting a verse or something along the length. 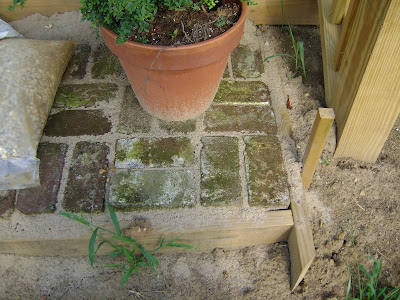 Here is a work in progress. It is the brick landing coming off the deck steps. Mr. Hughes is currently working on this project. I love that the bricks already have that mossy look to them. 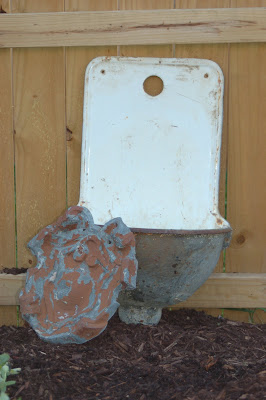 And, another work in progress. This is to become a water feature or a planter depending on how difficult it is to put all the pieces together. Mr. Hughes bought me a vintage French faucet one year for my birthday. We plan to attach that to the wall sink and mount the wall sink and the zinc shield to an old door. We haven't found the door yet.
Well, he has been a busy, busy man. So, this week, since I am off, I plan on baking him at least one goodie, maybe more. He has a bit of a sweet tooth you see. And, I hope to get a few of my projects completed as Baby Hughes allows!
Posted by Michelle Hughes on Monday, August 17, 2009