Okay, here it is.... I kind of feel like I have built up this project like we ripped out an ugly bathroom and put in a mini day spa for our child.  Not the case.  It was a simple project that didn't take a lot of effort or dinero. 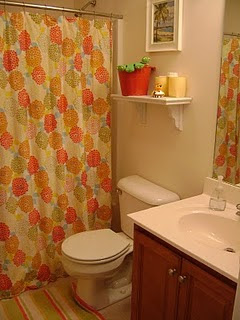 Now, here is the before.  A basic bathroom that had okay cabinets and vinyl flooring.  Blah except for the punch of color from the shower curtain.  Since we are going forward with The Plan, this needed to be an inexpensive project.  That meant no new flooring or anything major. So, I shopped the house. 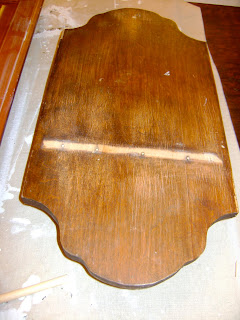 Found this in the garage. 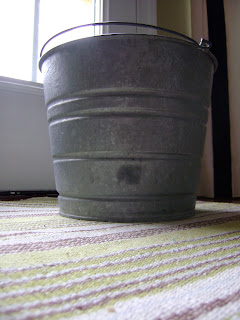 Found this in the studio.
So, after some paint and a new shower curtain and some towels, here is the After: 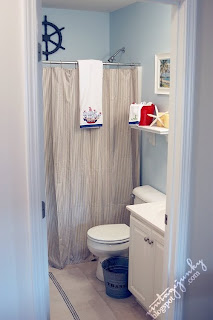 I painted the cabinets a creamy white that I had left over from the kitchen so no $$ there. 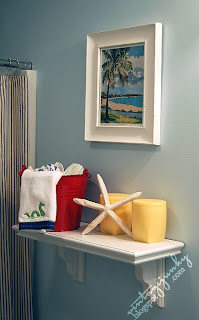 This shelf was already in the bathroom.  And, I had all the accessories except for the little washcloth. The beach watercolor is one that we bought on our honeymoon in St. Martin. I painted the walls Pale Orchid by Ralph Lauren. 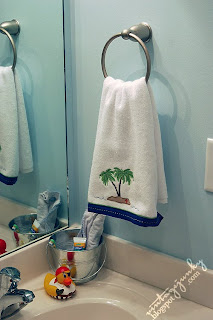 Here is a shot of the cute little hand towel.  And a pirate rubber ducky, because let's face it, no bathroom is complete without one. 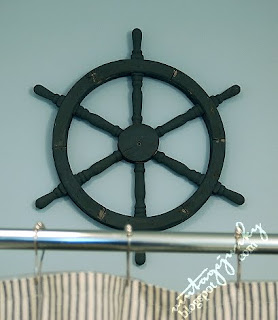 This wheel is hanging over the bathtub and it was leftover from baby hughes' pirate party.  We left it outside and it is all weathered and worn now... perfect! 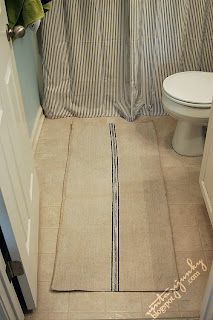 (I know, I need to iron the shower curtain!)
Here is what I decided to use for a rug.  This bathroom is awkward in that it seems to need 2 rugs... one in front of the tub and one in front of the sink.  But then it looks too cluttered.  Plus, I couldn't really find a cute one I liked.  Then, while showering away the massive amount of paint I had all over me ( I am a messy painter) I had a epiphany... most of my epiphanies are design related.  I had an extra grain sack that is the perfect size for the area.  So, I velcroed it to the blah vinyl. 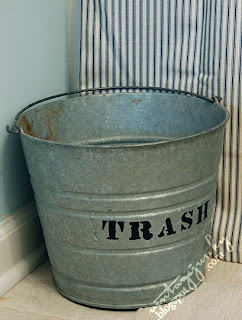 Here is what became of the galvanized mop bucket.  I just stenciled on it... I think I need to distress it slightly... 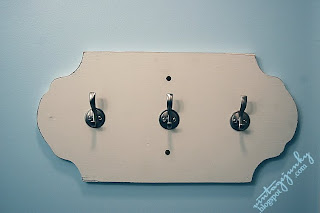 And this is what I did with the piece of wood from something Mr. Hughes found. I took down the traditional towel bar and added this. Painted it, distressed it and added three hooks from Home Depot.  I used some little numbered tacks to cover up the screw holes. 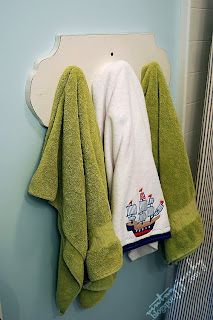 And, here is what the towels look like hanging.  We had the green towels and I was going to replace them, but I really liked the way they looked with the green stitching on the pirate towels and the way the green looked with the ticking stripe.
So there you have it.  If you have been keeping track, I bought a can of paint, three hooks, a shower curtain and the set of pirate towels from Pottery Barn Kids.  Pretty good I think!  At least it has more personality than the boring builder's basic that we started with.
We are working on the laundry room and hopefully we will have that finished this weekend. Hopefully *wink*
Posted by Michelle Hughes on Tuesday, February 09, 2010