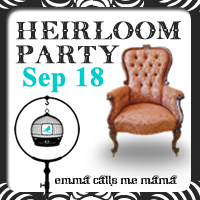 I am joining my wonderful friend Marie at Emma Calls Me Mama for her Heirloom Party.  Now Mr. Hughes and I don't have too many heirlooms.  Most of my family's heirlooms are held by my mother and her brothers and sisters.  But, I will show you a few of the ones that I have. 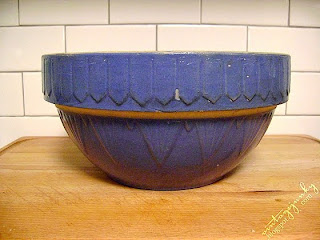 This blue bowl once was my grandmother's.  We were very close.  I remember her using it every year to mix cookie dough.  I always told her how much I loved this blue bowl and that I would love to have it one day.  I came for a visit a few years before she passed away and she gave me an option.  She told me that she had gone out to buy a new blue bowl that looked just like it, but it was much larger.  She told me that I could either have that one or the REAL blue bowl.  I chose the real one, of course.  She made me wrap it up in a towel and take it to my car immediately so that no one could see.  She then put the fake blue bowl in its place.  I guess she was worried that someone would get upset that she had given it to me.  I don't think anyone else had the desire to have it.  After she passed away, I also inherited the fake blue bowl. 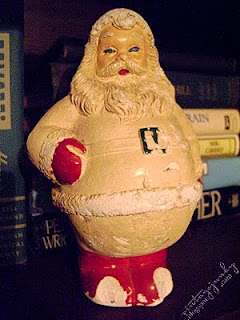 This little Santa belongs to Mr. Hughes.  It was his father's when he was little.  Most all the paint has worn off, but we like it that way.  Mr. Hughes adores this little guy. 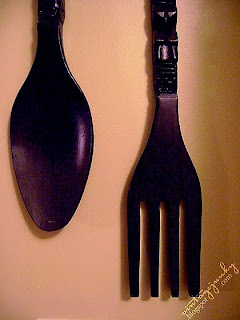 Here is another thing that I had to have of my grandmother's.  These giant fork and spoon always hung on the wall in her kitchen.  I always thought they were so `neat.  I never realized many, many people had these in their kitchen.  After I received these, I painted them black and now they hang in my kitchen. 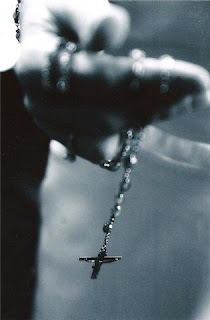 And this is probably the heirloom that I am most fond of.  This is  my grandmother's rosary.  My mother actually has it now.  My grandmother carried it at her wedding, along with my mother at hers, and then I carried it at mine.  I don't have a color photo of it... it is silver with these pretty periwinkle blue beads.  One day, my mother will pass it on to me.

Well, now I am off to see what everyone else has brought.  Thanks so much for hosting, Marie.