Musings of a Cableless Girl and the Beginnings of Another Project.

So, I never thought I watched all that much TV.  Just The Office and a little of the Kardashians here and there.  Well, since we are moving forward with The Plan, we thought it would be a good idea to trim some luxuries here and there.  And, since we really do only watch a few of the gazillon channels we had, cable went.  It is much quieter.  I am having dreams about Kim Kardashian and I getting in a fight.  So, maybe, maybe,  I miss it.

I am finding that I am getting more accomplished though, with time to spare.  Which brings me to my new favorite thing in the whole world... let me begin by telling you that I have a love/hate relationship with Target.  I had some gift cards burning a hole in my wristlet and I had some rare child and husband less hours.  So, I decided to go there to check out some Bamboo and organic cotton sheets that I had seen there.  Almost all the sheets in the entire place were on sale.  Do you think that they had any queen size in a normal, non icky color that brought back memories of the suede jackets that everyone used to wear?  Nope. Hate Target.  Then I saw these: 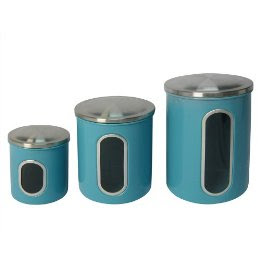 Love Target!  They are much more aqua in person.  But so fun!  So, I walked out of Target with a candle, 2 candy bars for the Mr. (he has a BIT of a sweet tooth) and some of this: 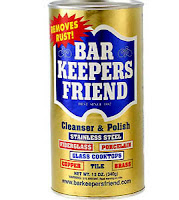 Now, I have heard of this before.  But, I really thought it was to get sparkly stainless steel sinks.  And, I can usually do that with my green cleaners.  I went to Target in search of sheets and something to clean my shower with... I hate our shower stall.  I would rather have an all in one bathtub in a tiny bathroom than that stinking shower that can't be cleaned.  And, I really do try to be as green as possible.  We recycle almost everything.  We buy vintage furniture.  Sometimes I make my own cleaner.  But, nothing, NOTHING would work on that nonslip surface that they put on the bottom of the bathtubs and showers now.  So, since I have all these TV free hours, I thought I would tackle the shower... I didn't have high hopes... I just had taken Mrs. Meyer's scrub to it recently and the dirt wouldn't budge.  Well, it cleaned it almost instantly... I was shocked!  I called Mr. Hughes in there to make sure that I hadn't gotten some in my eyes and that I could really see a difference.  Can you believe this is like a 1.63 a can and that it is on the bottom shelf?  How dare they? I guess toxic cleaners = cheap.  Kind of how you can buy a McDonald's hamburger for 39 cents but a salad is 15 dollars.

I had enough time with all of the time saved while Baby Hughes was napping to start a project that will eventually make him and the hubs pretty happy.  You see, we got rid of our coffee tables when he started moving around.  We replaced them with 2 square baskets that hold all his downstairs toys. 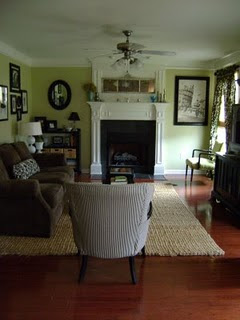 Lately I have been noticing that he is clearing off my end table (which involves moving frames and a glass urn) in order to play cars.  Luckily he hasn't moved my lamp yet.  So, I brought down a coffee table that we removed from the library when we moved Mr. Hughes' office in there.  And, he was so happy to have a place to play cars.  But, it still has some sharp corners (Baby Hughes is a 11 on the Wild Scale of 1-10!) and I have been itching to use some fabric.... 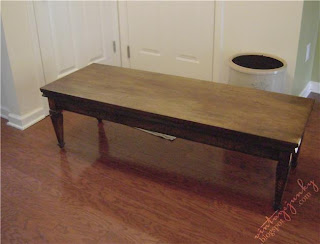 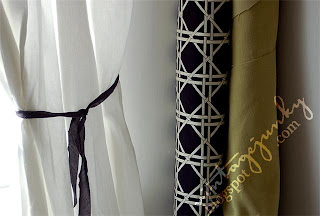 and turn it into this: 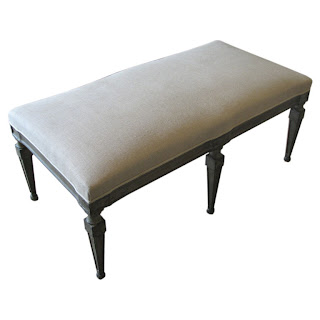 I was going to do button tufting but, as only a father would point out, the cars won't drive very well on a button tufted bench.  Mr. Hughes likes it because he can put his feet up again.  I have already painted the base and legs black.  The fabric is reversible, and I would love to use the predominately white side.  But, I just don't think that would be the wisest choice with Strawberry Banana Juicy Juice being splattered all about as it is in our home.  My wonderful mommy purchased the foam half off and is bringing it with her this weekend, so hopefully it will be completed this weekend.  Now I didn't forget about my other projects, in fact, on the way home tonight, I am going by Home Depot to get the paint mixed for both rooms.  I have the shower curtain hanging and just trying to decide which towels to get.  So, I hope to share some afters... okay I am done... I have rambled... must be the lack of the TV!!