All Aboard! A 3rd Birthday Party 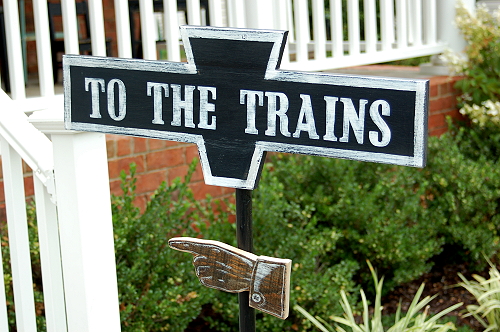 Hello there!  I am finally delivering on my promise to share the craziness that we call birthdays around here... at least for baby hughes.  If you haven't seen them before,  you can see his 1st birthday and 2nd birthday parties to know that we have been sick for at least 3 years now, but most likely longer.  We woke up to a rainy day which sort of put a kink in our photo booth plans... we still did it, but the photos were a little dark and foggy.  That sort of bummed me out, but I got over it pretty quickly.  We had loads of fun, baby hughes especially.  So, here are a few (I mean, A BUNCH) of photos of the decorations before everyone came. 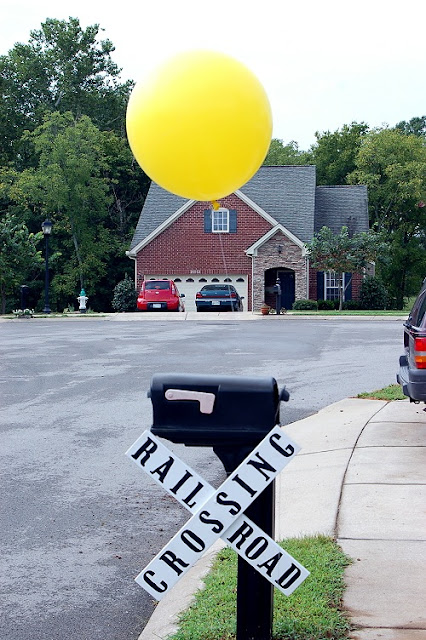 Mr Hughes made all the signs.  This one was to let everyone know where the party was, just in case the 3 foot yellow balloon wasn't a dead giveaway. 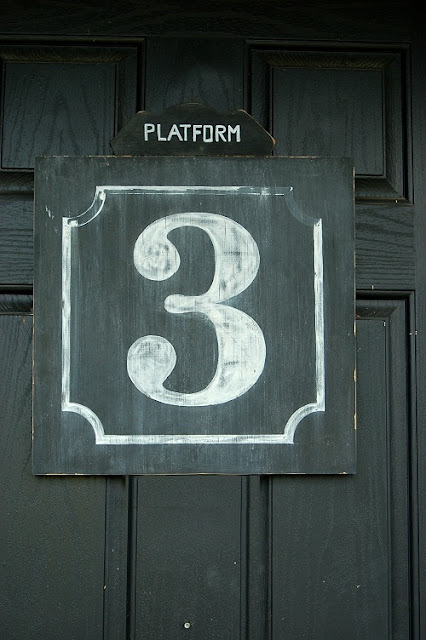 I almost painted the front door for contrast.  Almost.
It needs to be painted anyhow. 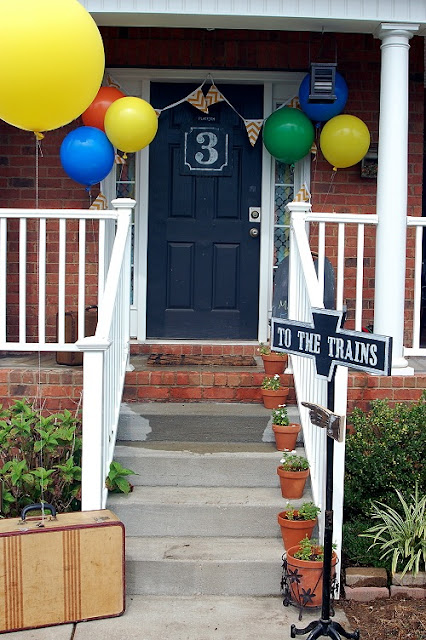 I originally started out with a color theme of aqua and yellow.  Then baby hughes said he wanted orange.  Then I got all the balloons in and I threw the scheme out the window and just went with it.  I got the round balloons from a car lot supplier.  I couldn't be picky with the colors for the price. 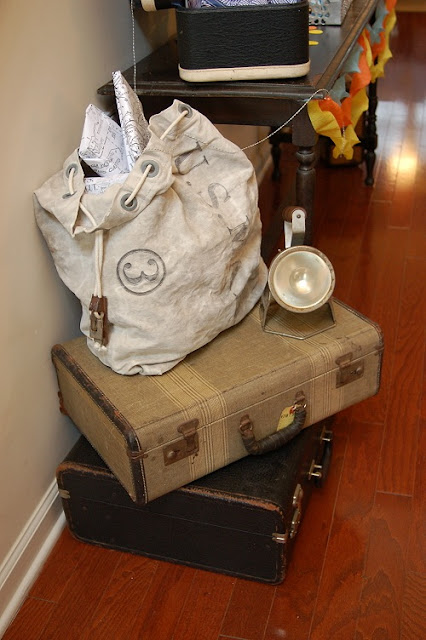 My stack of vintage suitcases was broken up and spread out... some out side with balloons tied to them and here in the entry.  Mr. Hughes (who, no matter what he says or people think, is not a hostage... he willingly participates in the parties) found this vintage post bag and I filled it with the presents from us. 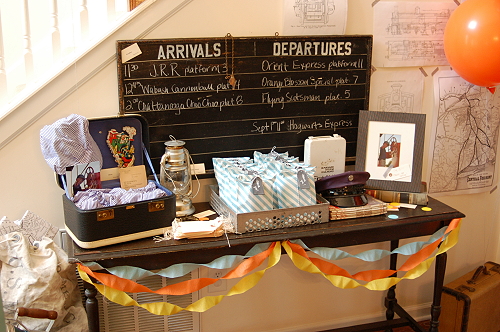 Months ago, I found this old chalkboard.  The lines were painted on it already... I almost positive that it is a train board.  I added the Arrivals and Departures to it with chalk pen.  This table had the engineer caps and the treat bags amongst all the vintage train stuff. 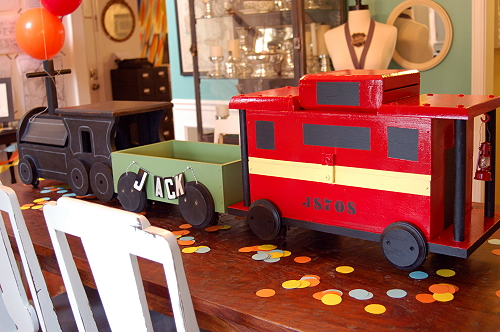 Mr. Hughes found this old handmade engine push toy and painted it.  Then, he decided it needed a caboose and a extra car. So he made them.  And I made jumbo confetti with a circle punch.  Be honest.... the confetti is what you notice... not the train *wink* I just happened to have a metal 3 in my stash and he was able to rig it so that it worked. Mr. Hughes had some vintage cross sections of steam engines and railroad maps blown up and printed and I taped them up all around the schedule board. 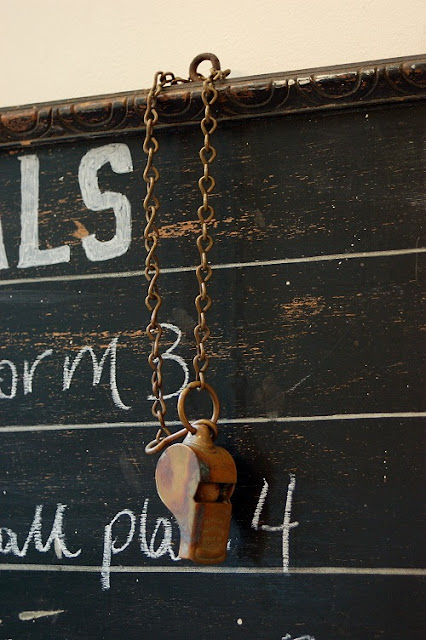 And, of course, we needed a brass whistle. 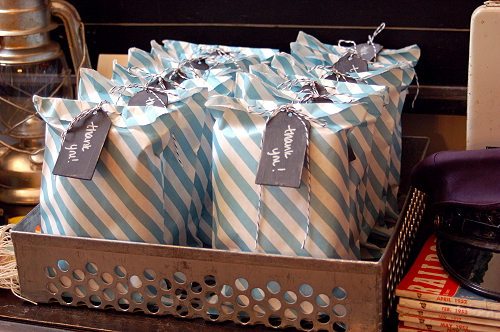 I forgot to take photos of the treats, but I included train stickers, a engine lollipop, a wooden train whistle (you are welcome, my dear friends and family!) and some graham crackers called Chugga Chews... they came in a train shaped box.  I painted some tags in chalkboard paint and wrote Thank You on them. 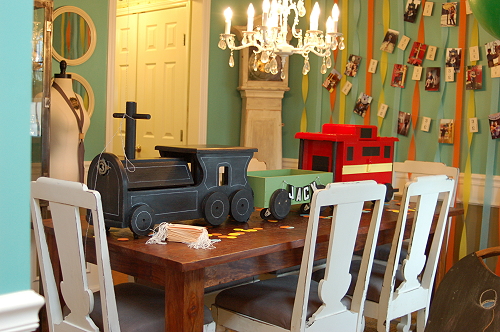 You can barely see them here, but I asked everyone to fill out a birthday wish for baby hughes on tags that sort of look like the vintage luggage tags. 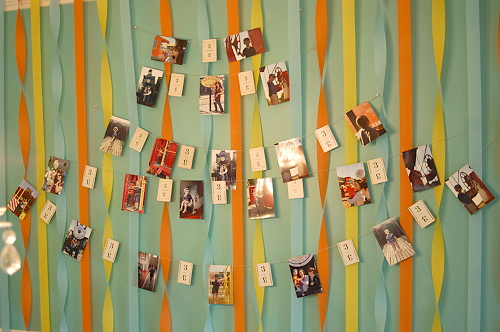 Usually a few days before the party I will see something or come up with something at the last minute.  These streamers were that thing.  I also printed out photos from the past year of all the train related stuff that we have done.  As you can see, we usually stop anytime we see a train museum or depot or tracks! 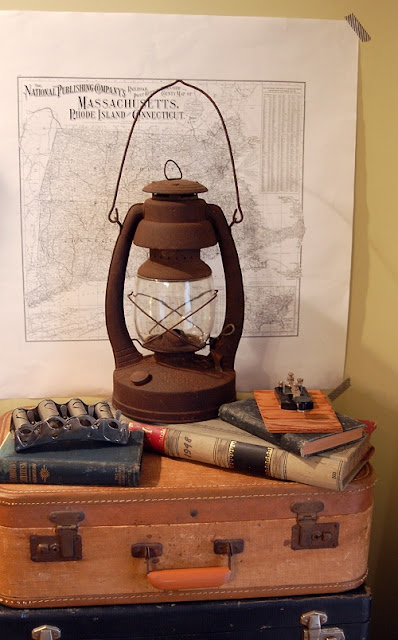 A few more things the Mr. found on top of a stack. 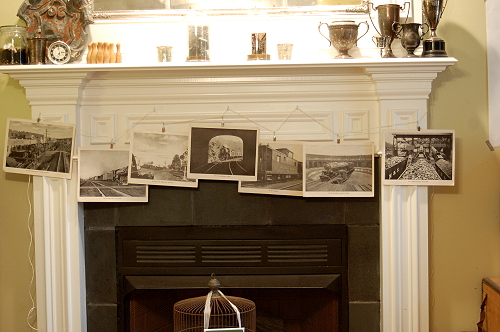 He also found these vintage images... I think they were like a learning tool... anyhow, they were of bridges and tunnels and tracks.  baby hughes loved them! 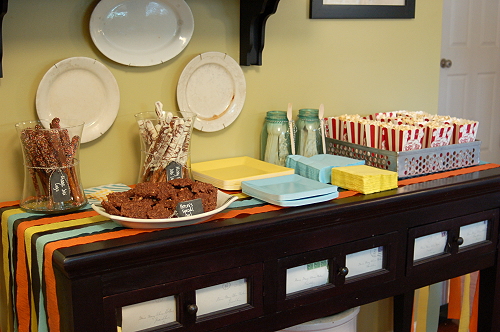 Of course we had food!  I tried to think of train related noshables, but I came up short. 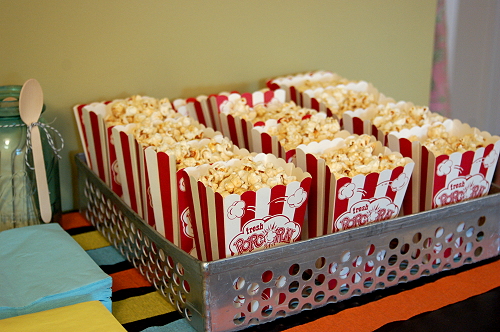 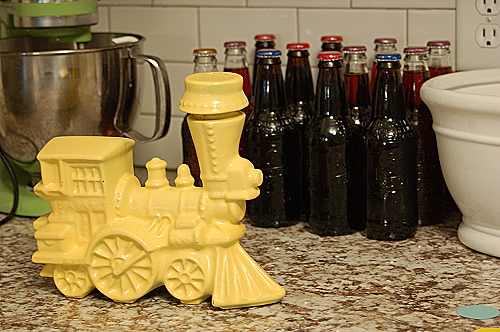 We even had some friends who donated some train things... this was a whiskey decanter that I spray painted 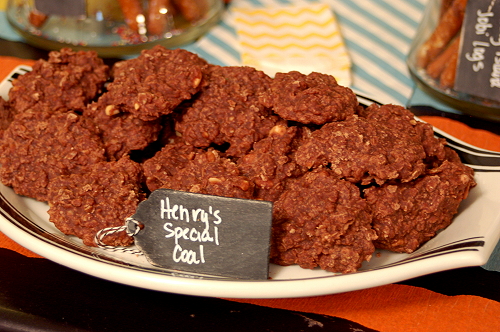 One of the the only "train-y" foods I could think of... Henry's Special Coal....which was chocolate oatmeal cookies (we call them No Bakes.) 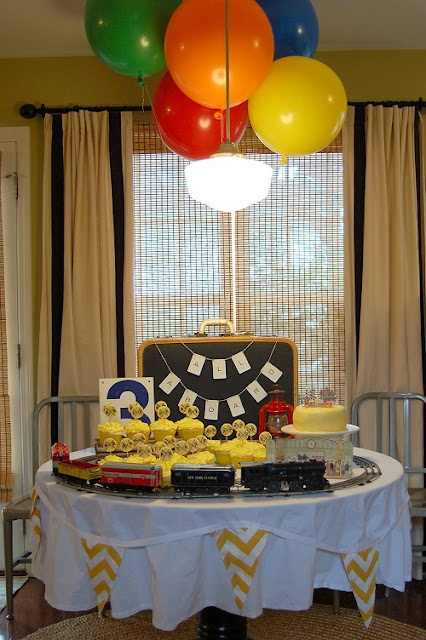 The cake table!  I love cake!  And the hyena loves his cupcakes.  This year I made cupcakes for the party and a small cake for his actual birthday which was the next day.  I didn't make the fondant this year.  I ordered it and it was lemon flavored and delicious!  A sweet friend gave the bambino a vintage train set as an early birthday present and I used it on the table to circle the cupcakes. 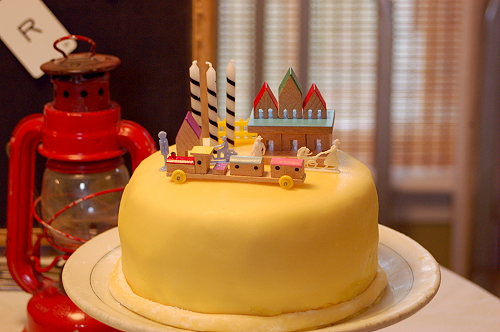 This was another thing found by Mr. Hughes... a teeny vintage train and station.  It is so cute... there is a guy riding a scooter and a woman pushing a baby carriage.  Oh and if you had any doubts, I am NOT a professional cake decorator and fondant isn't my strong suit.  Just to clear things up. 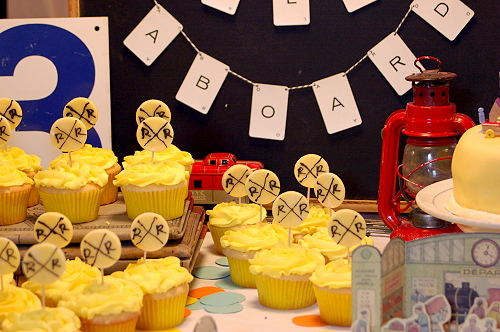 I made little railroad crossing signs out of the fondant.  I may or may not have had the caffeine shakes while lettering them! 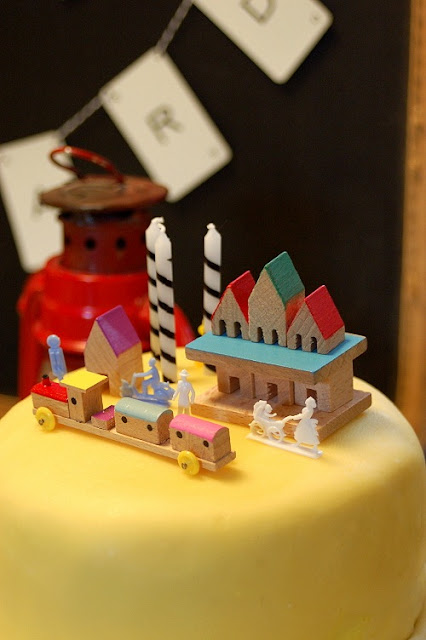 See the baby carriage?  Can you believe people used to just give this stuff tho their kids?  It was from out  of the country, but I am pretty sure there was no warning for kids under three. 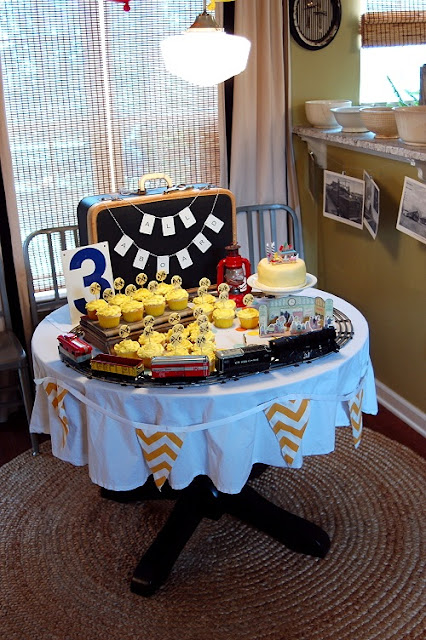 So that's all!  It was a shame that it was so cloudy... the photos weren't as clear as I wanted.  We had a great time, that is all that matters.  The balloons quickly became bopping weapons and the green one was fought over quite a bit.  We also had a little train table that you could decorate your own Thomas Wooden box car or fuel car... I am not sure where those photos are.  My baby is 3!  I can't believe it!  In the words of the hyena himself it makes me very "upcited."
Until next year... the birthday madness is over.
bye for now!