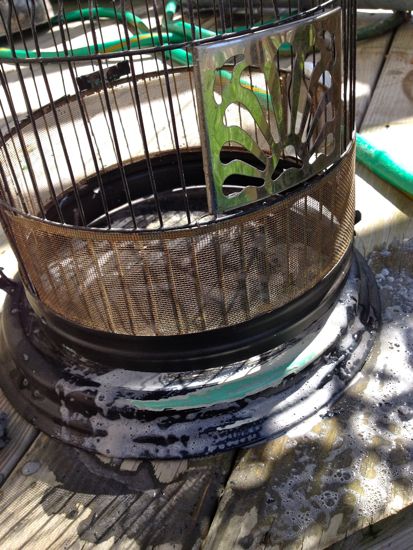 Since we have been at home a little more than usual this week with colds and ick, I was able to get some things accomplished that have been lurking in corners... either in my mind or literally pushed on a corner of a table.  I got my business books organized so that next year taxes should be much easier and quicker to do.  And, I had been meaning to take a closer look at this bird cage that the Mr surprised me with last year.  I noticed that there was some white and green on it before it was banished to the garage until I could work on it.  I planned on taking some time with some fine steel wool and see what was hidden underneath the black layer of paint.  I originally thought it was black~ green~ white.  Which wouldn't have been horrible, but seeing as I have a lovely little white one, I was really hoping there would be something better under the white.    So, I got to polishing with hot soapy water and some steel wool and realized quickly that 1. it was going to be tedious work and 2. that the prettiest aqua-y green actually lurked under the black and then white layer.  I decided to soak them once I realized the black paint was hastily applied and if it was wet long enough, it came off in sheets and took the white with it and left the green.  So, over a period of about 2 or 3 days letting Dawn and hot water do its work I was left with this: 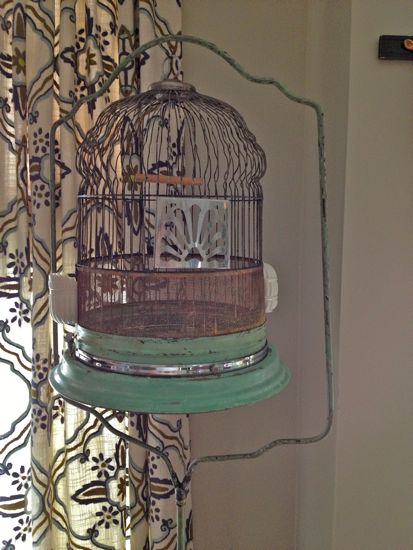 Originally, I was cursing the person who painted this cage (I know, painting over an original finish??  how is that for the pot calling the kettle black?)  But, it was rusty in some places and that is where the black paint remains.  I didn't completely remove all the other layers, but left bits here and there.  I didn't want to spray any clear coat on it, so I buffed a clear wax over the whole thing.  I wish I could have left the green paint on the skinny little bars, but it came off with the other layers. 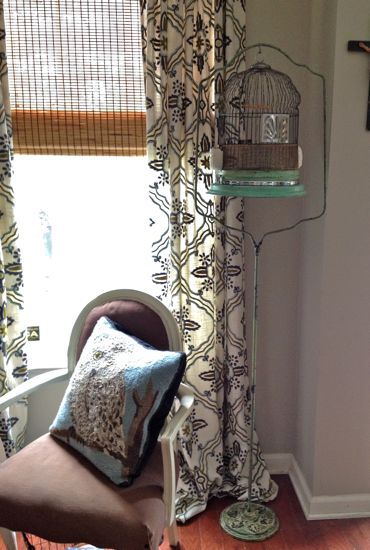 For now, I have no other plans than to keep it here in this corner.  I have played around with making it a lamp and we have actually wanted a bird for awhile, but I think this is just too small... how did they keep birds in these cages?

Hope you have a lovely Spring weekend!